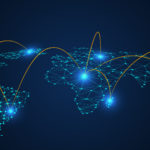 The concept of layered money is not new in monetary history. Large card networks like Visa and Mastercard do not function by themselves. These organizations work with the layers directly above and below them. Each layer represents a specific kind of financial institution that must interact with the other layers for every transaction to make it from the consumer to the merchant. Similarly in Bitcoin, there are layers for scaling and speeding up transactions. In bitcoin, these layers are designed to solve the technical limitations of the blockchain.

Every transaction that occurs in the bitcoin economy is registered in a publicly distributed ledger, which is called the blockchain. New transactions are checked against the blockchain to ensure that the same bitcoins haven’t already been spent, thus eliminating the double-spending problem.

The Bitcoin blockchain is decentralized and distributed where no single group or authority controls it. Data can only be inserted and viewed; no data is ever edited or deleted.

On-chain transactions are extremely secure and reliable. Once a transaction is recorded on the blockchain with 6 or greater blocks settled after it the transaction is secured and cannot be altered or reverted by anyone. Bitcoin’s base layer optimizes for decentralization and durability. Bitcoin’s proof of work allows the decentralized nature of Bitcoin and also eliminates the potential for a single point of failure, making it more resilient than traditional currencies. The Bitcoin blockchain ledger provides a permanent record of all transactions, and the open-source accessibility of the ledger allows anyone to view and verify previous or ongoing transactions and addresses. The ability of anyone to view and self-audit bitcoin transactions is essential to fostering the decentralized nature of Bitcoin.

Limitations of the Bitcoin Blockchain

Although the base layer provides excellent security, transparency, and decentralization, it can be slow and costly for widespread everyday transactions. In Bitcoin, new blocks are generated on average every 10 minutes and support less than 7 transactions per second with a 1-megabyte block limit. In contrast, a payment processor like Visa or Mastercard can support thousands of transactions per second. As the Bitcoin network grows, mining fees in the network are expected to rise due to higher network traffic and demand, making it impractical for everyday use. Transactions confirmed on the bitcoin blockchain may even take several hours before it is confirmed with finality.

To achieve much higher transaction throughput without compromising on decentralization and security, the Lightning Network was proposed to make transactions extremely fast and cheap.

In the event that a bi-directional payment channel is not open between the transacting parties, the payment can also be routed through the network. This is done using an onion routing technique similar to Tor, and it requires that the sender and receiver of the payment have enough mutual peers to find a path for the payment.

Benefits of the Lightning Network

If we compare Bitcoin with fiat, Bitcoin’s base layer is like fed wire or ACH, while the Lightning Network is like visa or MasterCard but much more scalable and efficient. Critics of bitcoin completely miss the fact that speed and efficiency should take place on higher layers, NOT on the base layer. Lightning will show the world bitcoin’s true capabilities as a medium of exchange.