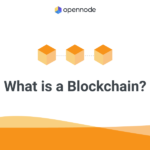 What is a Blockchain?4 min read

What is a Blockchain?4 min read

Bitcoin was the first example of what the world now knows as the blockchain. While blockchain, cryptocurrency, and distributed ledger technology have all become common vernacular, we at OpenNode want to take a look at the origins of the word “blockchain” and distinguish its true definition from its current loose and misleading one as defined by corporate technology circles.

Understanding Bitcoin frankly requires new vocabulary. At OpenNode, we are building a detailed glossary of Bitcoin terms, definitions, and phrases to familiarize you with the necessary vocabulary to navigate Bitcoin. The first word in our glossary is Mempool, but for now think of it as the waiting place for transactions.

A block is a collection of, on average, a couple thousand transactions from the Mempool. Spenders of bitcoin will attach an appropriate fee to their transactions according to their need for a fast confirmation.

Every ten minutes, a miner confirms a block. Blocks become uneditable and permanent after the passage of just a few blocks. But before a block confirms, all transactions in that given block must go through an audit. The audit makes sure that all spenders of bitcoins actually have the bitcoins they tried to spend. The audit and confirmation process is called mining.

Mining is a global race in which the world’s fastest, most powerful computers try to solve a difficult math problem, and the winner receives the block reward. Bitcoin mining is similar to a car’s transmission. Without the transmission, a car’s engine cannot power its wheels to move the car forward. Without miners confirming transactions, the blockchain would come to a grinding halt as blocks would stop propagating.

Now that we’ve defined blocks, outlined their purpose, and described how mining works, let’s define blockchain. A blockchain is nothing more than all blocks connected together by a chain through time. The linkage of these blocks creates the chain in blockchain. As of this writing, the Bitcoin has confirmed over 592,000 blocks since 2009. You can think of the Bitcoin blockchain as a record of its heartbeat since birth.

How to navigate the blockchain landscape: don’t

The term blockchain doesn’t even appear in Satoshi Nakamoto’s seminal Bitcoin white paper. In fact, the word blockchain first appeared in online forums about Bitcoin. It was often used in these forums with two words “block chain” instead of “blockchain” by the earliest and most intimate users of the Bitcoin protocol.

Due to Bitcoin’s early success at achieving an impressive market value, we have seen an onslaught of hype and delusion around “blockchain technology” over the past few years. This phrase has become ubiquitous in today’s tech communities, but without a currency with value driving the monetary incentive to mine blocks, a blockchain is only a marginal iteration of distributed databases.

The word blockchain is, however, a very convenient way to describe Bitcoin’s data structure and how it works. To extrapolate that “blockchain technology” should be used for other industries ignores the security and monetary incentive mechanisms of Bitcoin mining and what a blockchain really is. Our goal at OpenNode is to help businesses avoid unnecessary confusion surrounding the buzzwords around blockchain technology and uncover the true reason blockchain is exciting and innovative: Bitcoin’s blockchain.

Our goal with the OpenNode Blog is inclusion

We want to teach you about Bitcoin and encourage you to join the future of money. That said, we aren’t advising you to convert your life savings into Bitcoin, nor are we administering financial advice to go out and buy Bitcoin today. Bitcoin is a world changing technology that is shrouded in fear, uncertainty, and doubt. We want to alleviate fears by explaining, encourage certainty by avoiding risks, and eliminate doubt by familiarization.

We will be answering the question every forward-thinking business should have right now: should we be accepting Bitcoin? Absolutely, but we also understand that businesses will require comprehensive education and guidance due to Bitcoin’s unfamiliarity and complexity. Email and web browsing were once nascent technologies that required computer science expertise but are now ubiquitously inherent to billions. Bitcoin is in the early stages of a transition to ubiquity, and we at OpenNode are here to power this transition. That’s why we created OpenNode, a simple, powerful solution so that everyone can accept Bitcoin at their business.