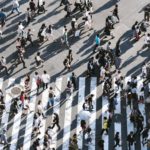 How many people use Bitcoin?4 min read

How many people use Bitcoin?4 min read

Who are the early adopters of Bitcoin, and how many are there? The answer isn’t easy to find. Bitcoin was designed with pseudonymity, and that’s why finding precise data on how many people use Bitcoin can be quite difficult. But not impossible.

Every Bitcoin transaction is recorded on the public blockchain, so it’s possible to identify how many transactions occur and how many wallets are involved in a transaction. Privately, we can  reference surveys and public statements from companies in the Bitcoin industry. Based on some of the information that we’ve found from public surveys, daily Bitcoin transactions, and the number of users on Bitcoin exchange platforms, we believe there are tens of millions of Bitcoin users worldwide! Let’s unpack some of the numbers behind this claim.

America’s largest Bitcoin exchange and wallet service is Coinbase. Popular for main-stream Bitcoin adoption, Coinbase positioned itself to be one of the most trusted Bitcoin platforms available. Unlike many of its Bitcoin exchange competitors, Coinbase has never been hacked and continues to pursue compliance with regulators. As one of the world’s largest platforms designed for Bitcoin users, their growth is a strong indicator of how many people are actually using Bitcoin. According to Coinbase’s website, their user base is over 30 million users.

Another business within the Bitcoin industry that has seen some massive growth over the past couple years is the Hong Kong based cryptocurrency exchange Binance. According to an interview with their CEO, the Binance platform has about 15 million total users now on their platform.

Another large cryptocurrency exchange that needs to be added to this equation is Etoro. Founded in 2006, Etoro operates as a social trading and multi-asset brokerage company that focuses on providing financial and copy trading services. Since adding Bitcoin to their platform, Etoro has grown exponentially and expanded its services to the US. While the the platform has about 12 million registered users, co-founder and CEO Yoni Assia has reported that up half of the platform’s “active traders” trade crypto.

This leads us to an important point. Registered users don’t necessarily translate into number or users, traders, or owners. And it’s also why gathering an accurate Bitcoin population is difficult.

Ok, so how many people use Bitcoin

We don’t exactly know! Due to the nature of the privacy in the Bitcoin network, it’s still very difficult to give an exact number on how many people use Bitcoin, and that may never change because the pseudo anonymity of Bitcoin is a feature of the network, not a bug. Even though some Bitcoin companies are able to disclose certain numbers for how many users they have or how many transactions are processed, aggregate data isn’t yet robust. An interesting research piece last year came up with over 13 million total Bitcoin owners worldwide, but we think it’s safe to say the number is likely multiples of this.

One thing we do know for sure is that Bitcoin is being used as a currency not only in the US, but all around the world. More businesses are realizing that there’s a community of Bitcoin users around the world who have the ability to spend their digital currency. Whether you run an enterprise company or a brick and mortar store, your business should consider accepting Bitcoin to address this rapidly growing population of Bitcoin owners and users.