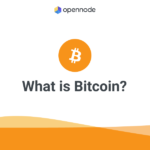 What is Bitcoin? Here’s what you need to know5 min read

What is Bitcoin? Here’s what you need to know5 min read

So, What is Bitcoin?

Bitcoin is a cryptocurrency, which can be defined as decentralized digital money. There are many cryptocurrencies in the world — such as Ethereum, Ripple, or Monero — but Bitcoin is unique for a few reasons:
1. It is the world’s first decentralized cryptocurrency.
2. It does not have a CEO or owner,
3. It is never been compromised since its conception.
The most important characteristic of Bitcoin is that it is finite. Only twenty-one million individual coins will ever exist.

Bitcoin may not have a CEO or owner, but it does have a creator and his name is Satoshi Nakamoto. To this day, nobody knows the true identity of Nakamoto and he is no longer active in the development space. Nakamoto introduced Bitcoin with a nine-page white paper in 2009. The white paper describes the entire Bitcoin protocol, coins the phrase “blockchain”, and outlines the framework that many other cryptocurrencies copied. We do not know much about Nakamoto’s true identity, but we know that he is rich. Nakamoto holds 980,000 Bitcoin (worth $4.72 billion at the time of writing). His holdings account for almost five percent of the total that will ever exist (21,000,000 in total).

When I say Bitcoin is decentralized it means that no central authority controls the supply. The most common type of centralized monetary authority are central banks (in the US, the Federal Reserve). Central banks’ entire job is to control the money supply. If you control the money supply you have the ultimate say of how the economy goes. Is the currency too weak? Simple. Remove some money from circulation to increase its value (supply down, value up). The same works in reverse; if the currency is too strong, print more of it to bring the value down (supply up, value down). Decentralized currencies cannot be controlled by any group or individual.

How does Bitcoin work?

Bitcoin transactions post on the blockchain. The blockchain is a distributed ledger that anyone can view or download. Think of the distributed ledger as an excel spreadsheet. This excel spreadsheet can only be read by a certain program called Bitcoin and everyone can view it at the same time. This “excel spreadsheet”’s distributed nature is exactly what makes Bitcoin decentralized. The ledger makes the amount per transaction public but the user information is always private. Encryption (difficult math problems) protect each individual’s unique ID. The amount processed is public for all to see. The Bitcoin blockchain is a list of every transaction that has ever transpired. It is visible for all to see and cannot be corrupted.

When a Bitcoin transaction occurs people called miners validate (solve) the cryptographic function (difficult math problem) through a process called mining. Mining prevents counterfeit transactions and security breaches from occurring on the blockchain. Every ten minutes a new block is born. The un-mined block contains all the transactions since the last block. Miners from all over the world race to validate all the encrypted transactions with powerful computers called “mining rigs”. The reward for mining is high. The award for first miner to validate a block is twelve-and-a-half Bitcoin (worth roughly $60,212 at time of writing). Every 210,000 blocks, or roughly every four years, the reward halves in an event called the halvening. The next halvening will take place on May 24, 2020.

Bitcoin is a way to exchange value anywhere in the world without a third party. You can think of it as an in-person payment made on the internet. You don’t have to pay your bank or any credit card company to trade a US dollar bill for a coffee at your local coffee shop. These in-person transactions don’t require a lot of trust because you are physically there to make sure you get your coffee after you pay. However, when you buy something online, you need more trust. You cannot be certain that what you buy online will actually arrive. That’s why you need a third-party that both sides trust to mitigate the transaction. With Bitcoin, you can send money peer-to-peer to anyone, anywhere in the world as if you were placing a US dollar directly into their hand.

OpenNode seeks to bridge the gap between Bitcoin and the rest of the world. Our simple platform makes using Bitcoin for your online business a breeze. OpenNode offers instant exchange from Bitcoin to many world currencies. We also offer instant transactions powered by the Bitcoin lightning network. For more information about our offerings, be sure to check out our website at opennode.com.